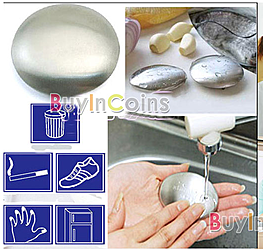 It really works! I'm impressed! (+ photo, little secret of use and the catch of this soap)

Up to this point, I must admit, it was somehow lazy for me to write a review about such a trifle as metal soap. But today it just struck me to the depths of my soul and I believed in it - this soap really removes completely absorbed garlic and onions from the hands! And this is the second day after garlic cooking.

I usually use this soap immediately after cooking, in some magical way the soap really removes the smell of garlic and onions from my hands. In fact, everything is explained by the chemical reaction that stainless steel combines with the smelling substances of garlic and simply removes it from your hands. I think that it is so, because over time, an invisible greasy deposit accumulates on the soap, it becomes covered with a kind of invisible film, which is not washed off by anything. However, this does not prevent the soap from removing odors.

Yesterday, on the eve of the New Year holidays, I made a bunch of Korean carrots for the festive table. I do not trust shop slats, which invariably put all sorts of poisonous food additives, so I cook it myself. I made Korean carrots, who cares, here according to this recipe - link - from the site "Excellent". I love this site very much, there are a lot of yummy there, including for vegetarians and for a raw food diet.

I forgot to use metal soap immediately after making Korean carrots. And his hands smelled like hell of garlic. The smell did not go away the next day, such its specificity ... This smell from the hands began to annoy me and I could not stand it and still tried to rub my hands with soap. I knew that soap removes odor, but it was poorly believed that it would cope with the smell on the second day.

And what was my surprise when I sniffed my hands, and they no longer smell like garlic! Damn, I was so happy, a trifle - but nice! Now I’m sitting and sniffing my hands, if there’s a glitch - they really don’t smell anything!

My little secret when washing with metal soap so that the garlic really leaves - you need to rub it with your fingers, rub it well under a small stream of cold or cool water. Soap you need to wipe the pad of each finger, as if you want to rub the soap into the skin. And you need to do this for a couple of minutes, or just until the moment when it stops smelling like garlic from your hands and starts to smell like metal. After that, you can wash your hands with ordinary soap and all - no haunting smell of garlic! Voila!

I ordered this wonderful soap on the Chinese website Buyincoins for only 30 rubles, a ridiculous price for such usefulness! I give a link to the product page, I recommend for purchase - a link.

I adore such wonderful little things that you don't believe in at first, but then when you try it, it’s a really wonderful miracle. Among these wonderful things, I also have a banana slicer and a peeler from the same site. Useful things.

And for skeptics - I anticipate the question - they say, nafig buy a separate metal soap, if you can also rub a stainless fork, for example. (ha ha, I also thought so before) Nope, guys, other items from stainless steel will not be able to remove odors from the hands. This effect will not be, because all kinds of stainless steel spoon-forks are made with a coating, and the metal will not react with odorous substances of garlic. And this soap is special, it does not have a coating, it is simply polished, but the metal is essentially bare, therefore it reacts with substances and the skin smells of metal instead of garlic, and after that you should wash your hands with a simple soap.

But therein lies the catch - the soap famously removes the smells of garlic, herring and onions from the hands, but after washing the pads of the fingers become wrinkled for a while, as if they were kept in water for a long time. I don’t know why this happens, apparently, the metal reacts not only with odorous substances, but also with the skin of the hands. But you can close your eyes to this trifle - but the soap removes smells perfectly!

My feedback on other interesting kitchen utilities:

wonderful peeler with a container

Our first tablet, there is nothing to compare with yet ... Review after almost half a year of use. Features and photos from all sides. All the pros and cons.3 months计算机、笔记本电脑、药片

It really works! I'm impressed! (+ photo, little secret of use and the catch of this soap)3 months小厨房的器具

Cool mouse for a low price! SmartBuy 338 One in black and white.3 months计算机外围设备